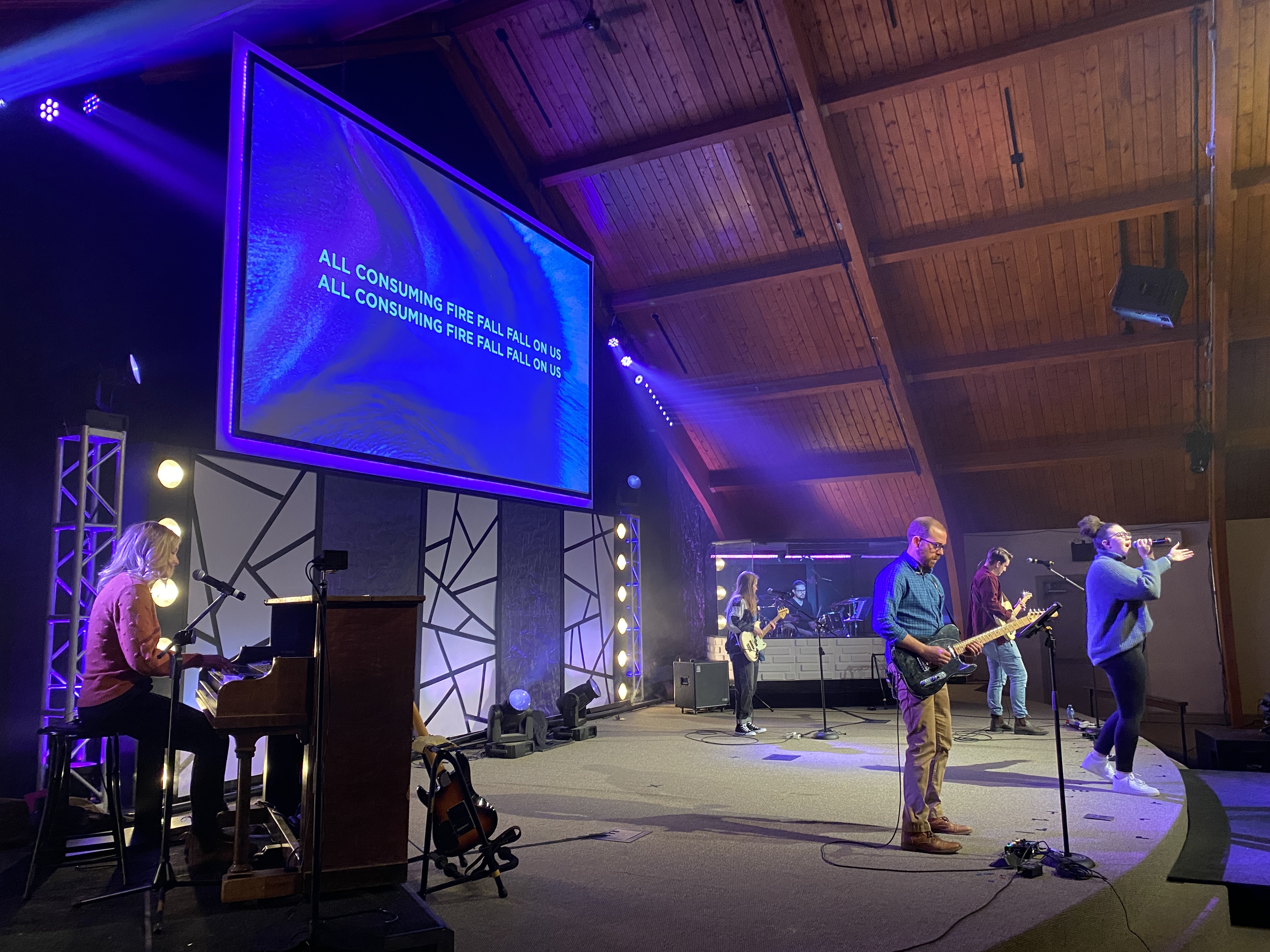 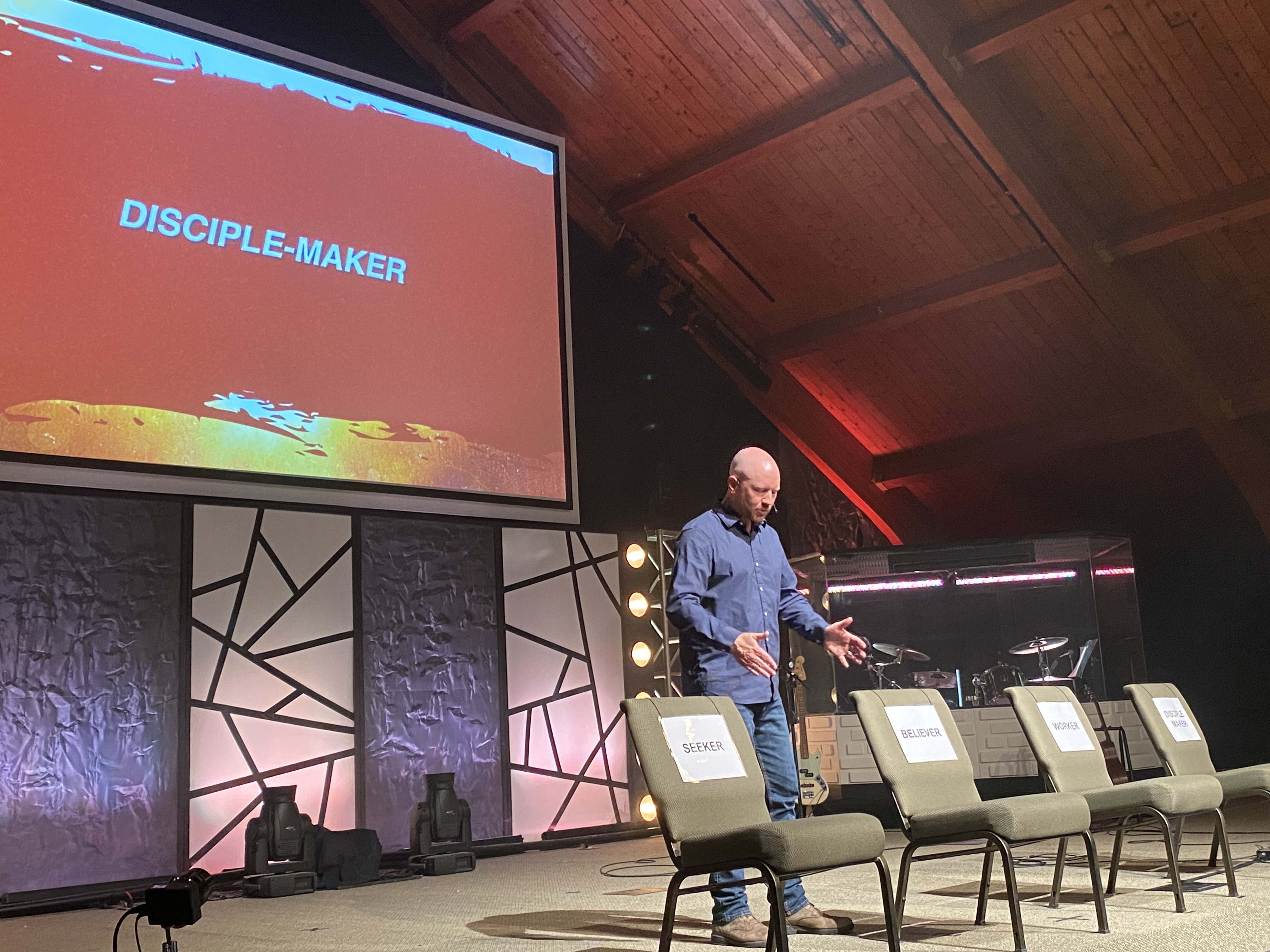 It was a day of celebration at Crosspoint yesterday. John (Kelsey) Sherwood candidated as the next Lead Pastor and received a 98% vote for an Initial Two-Year Call and he accepted it on the spot – congratulations! The three-year journey of pastoral search was made possible by the effective and sacrificial leadership of Interim Pastors John (Willo Ann) Symonds & Tim (Gayla) Guptill – our deep appreciation for your service. John’s official first date as Lead Pastor is yet to be announced but will likely commence prior to the usual time of pastoral transition. 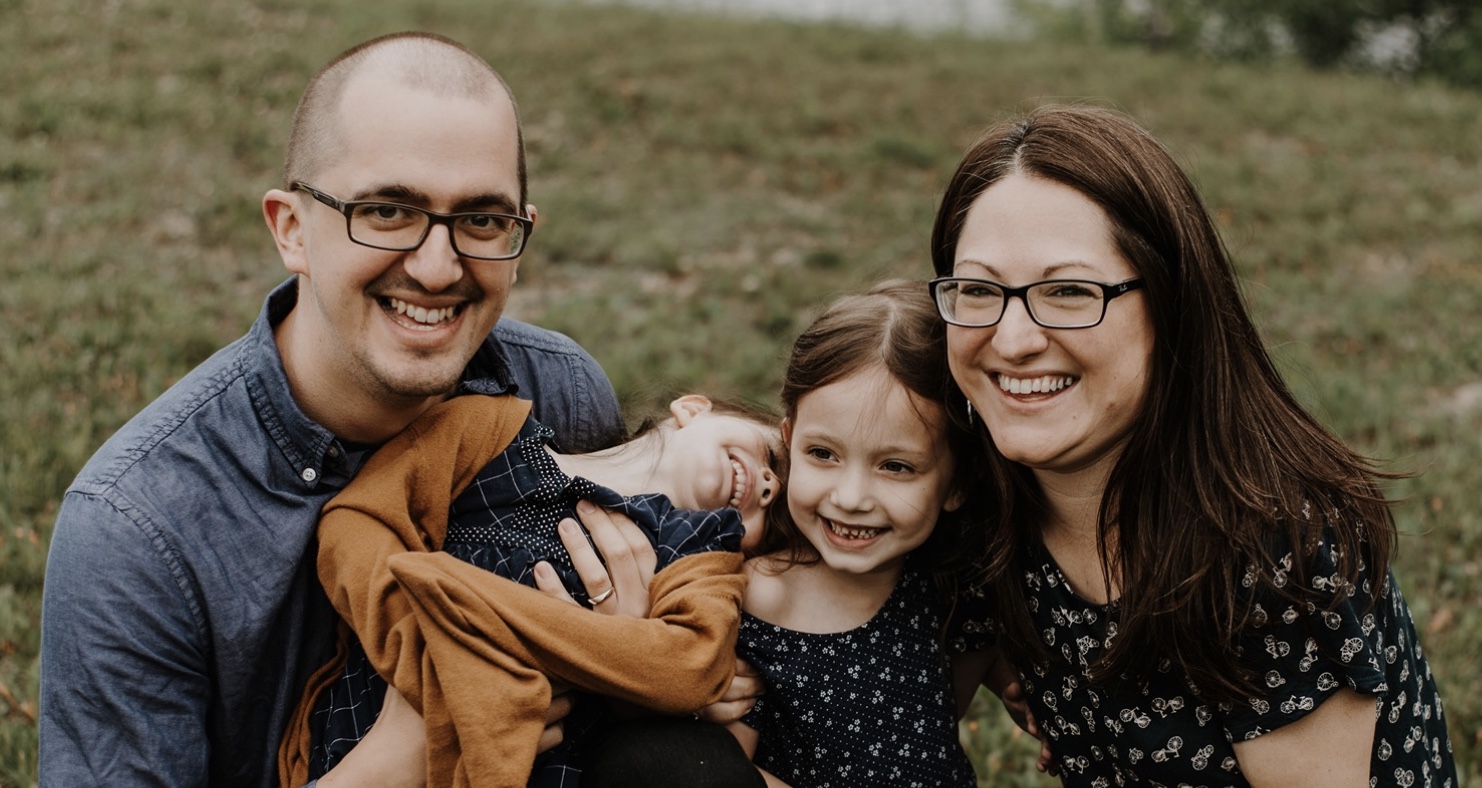 Congratulations are also in order for David (Sonja) Hartlen for yesterday’s 93% vote in Perth Andover (Reg Thomas) as he has accepted an Initial Two-Year Call as Lead Pastor commencing this July. 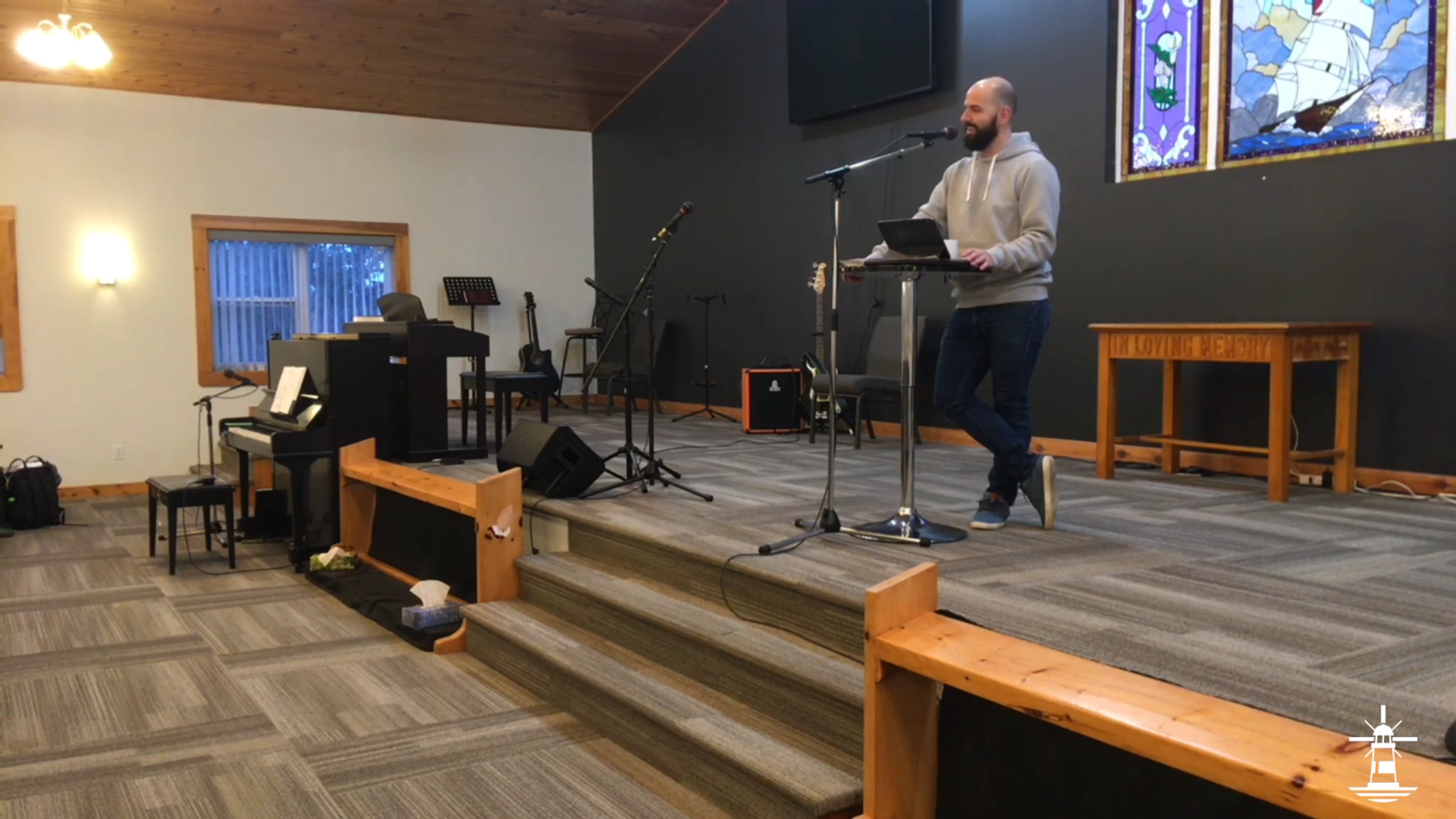 Tim Conrad (Woods Harbour) preached his Sunday morning message… on Tuesday evening this past week! A great idea for this hardy church family who chose to postpone the service rather than outright cancel because of a storm last Sunday – impressive! 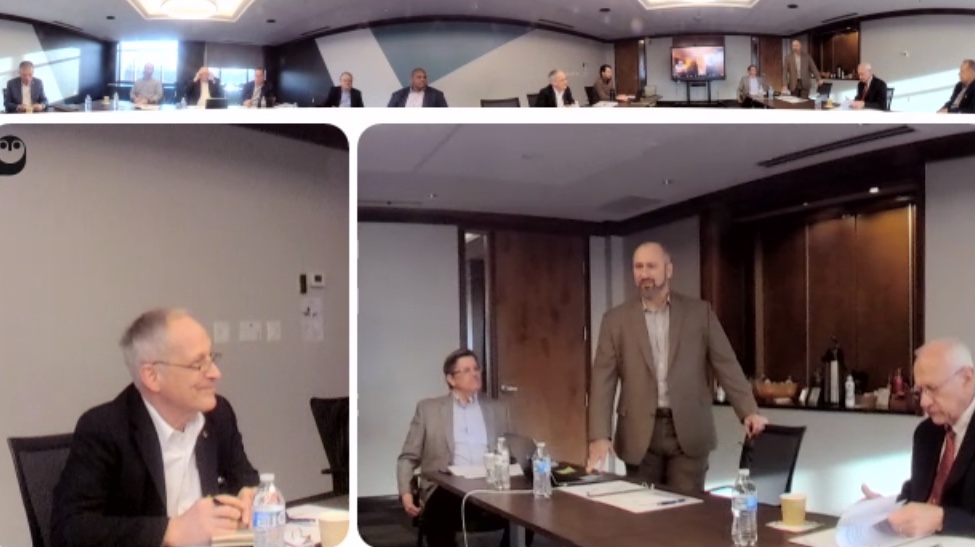 It was my pleasure this week to participate virtually in the semi-annual Wesleyan Education Council (WEC) held at HQ. The collaboration and courageous innovation of this group of Kingdom leaders is always an inspiration. Special time was dedicated to express appreciation to Interim President Crothers for serving Southern Wesleyan University during this year of transition under the capable leadership of Board Chair Mike Hilson. Time was also taken to share words of esteem and deserving honour for Dr. David Wright who is retiring this summer after serving nine years as President of Indiana Wesleyan University. 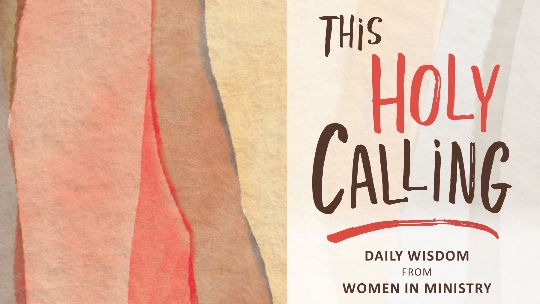 CLICK HERE for more information on a new 25-week devotional written by women in ministry for women in ministry available from Wesleyan Publishing House. Our own Rev. Natalie Gidney had the privilege of writing for this project along with women clergy from various holiness denominations. It launched last week at the Wesleyan Holiness Women Clergy Conference in Dallas, Texas. 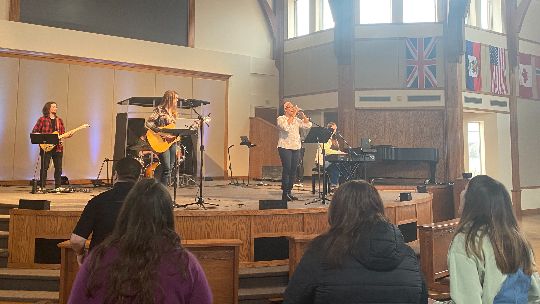 It was so encouraging to have opportunity to preach in Chapel this Friday at Kingswood University. Students conducted two March Break ministry teams. One led by Matthew Friedman to Toronto and the second led by Mike MacNeil to Honduras – the first ministry teams sent out in two years. Chapel began with an inspirational video with highlights of the Honduras trip.

National Superintendent Steve Elliott convened the National Board of The Wesleyan Church of Canada (TWCC) this week. This included a highlight report from CEO Tanya Nace of World Hope Canada outlining the extensive relief work mobilized to those impacted by the war in Ukraine with particular focus on refugees in Moldova who have just received a shipment of $11M of medication. Tanya reported that approximately $100K of this donation was provided from churches in TWCC. Thank you to all our pastors and church leaders who are taking the initiative to promote these needs and to mobilize the prayers of the Church for peace.

GP Roundtable (Missions Pastors/Directors)
Global Partners would love to invite you to lunch followed by a round table discussion to talk about all things missions!  James Winn, Director of Mobilization, and Michalla Arbour, Regional Mobilizer, will be at the District Office on Thursday, March 24 (Noon – 3:00 p.m. Atlantic Time). They would love to share with you about some of GP’s newest initiatives as well as give you some updates from around the world. In addition, they’d love to hear from you about how GP can serve you better, especially as it relates to sending, partnerships, resources, and short-term teams.
Points to Ponder 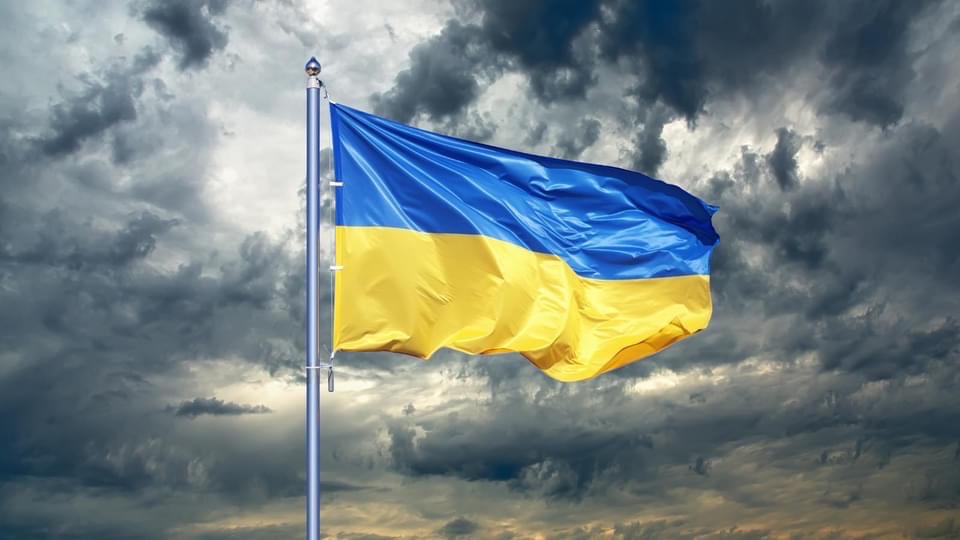 National Superintendent Steve Elliott (The Wesleyan Church of Canada) is calling Wesleyans to partner financially with World Hope International (Canada) as our official relief and development arm. CEO Tanya Nace gives stellar leadership to this world-class, highly effective and trustworthy organization. World Hope International is working with global and local partners in response to the invasion of Ukraine and the outflow of refugees into neighbouring countries. CLICK HERE for more information on how to give through WHC. 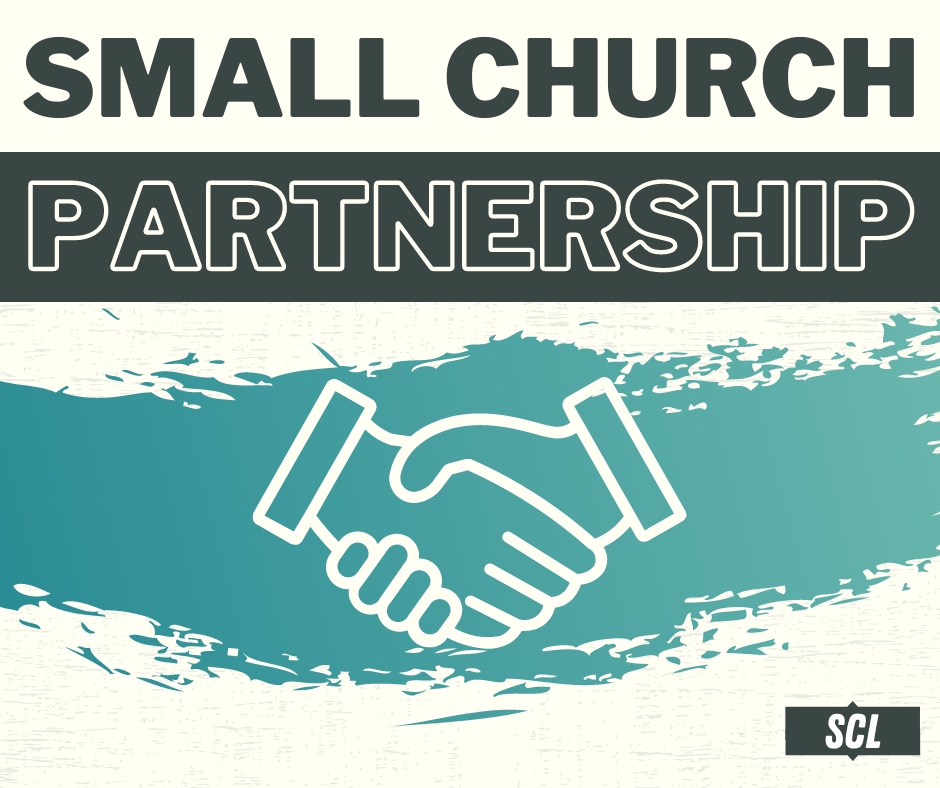 CLICK HERE for more information about “Small Church Partnership” which will be zeroing in on the importance of creating partnerships between churches, schools, and the local community, and how to make them happen. This Zoom presentation will take place on Tuesday, March 22nd @ 1:00 p.m. Eastern Time. 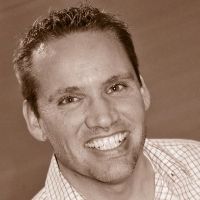 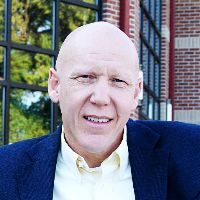 Praise God for the exciting announcements regarding the March lifting of pandemic restrictions! It is becoming increasingly likely that Beulah Family Camp (BFC) will return in 2022. Final decisions regarding BFC will be determined by the DBA shortly after Easter. I am pleased to announce that in addition to having Kelly Jay back as our Worship Leader, we will be challenged and inspired by two premier leaders and preachers in The Wesleyan Church, Rev. Mick Veach (upper left from Kentwood Community Church) and Dr. Steve DeNeff (upper right from College Wesleyan Church). CLICK HERE for the Camp Evangelists’ bios. 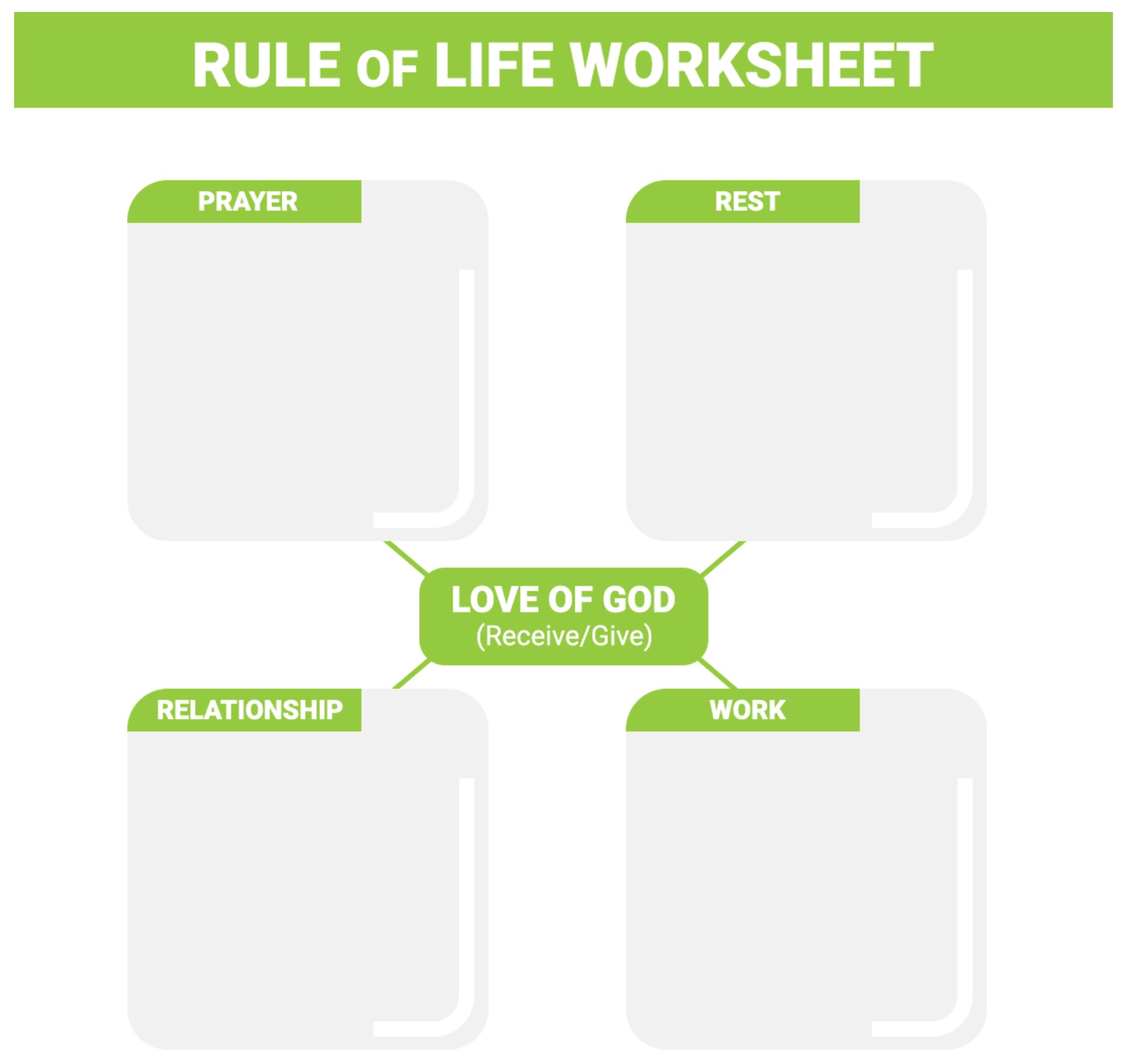 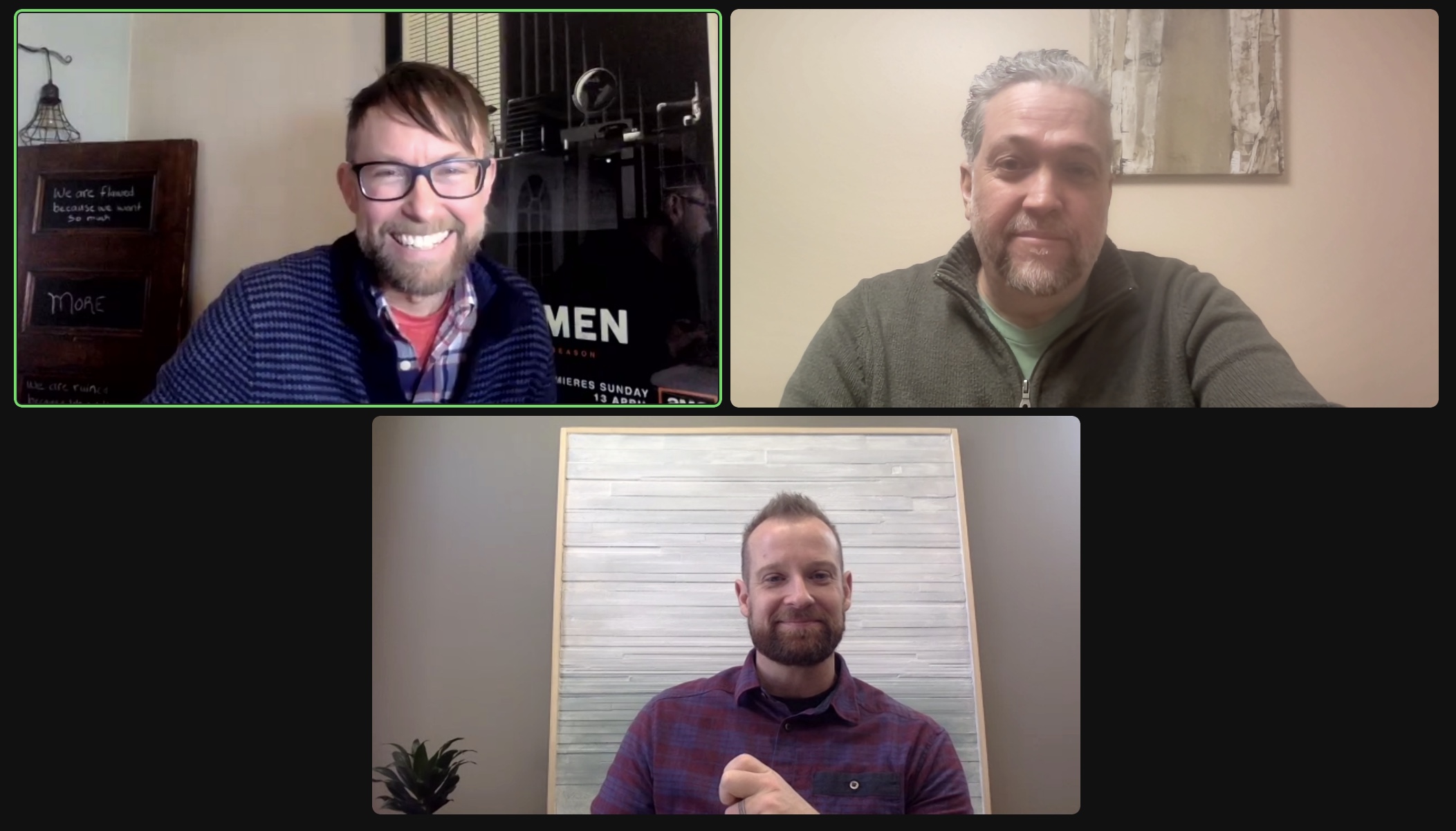 I joined David Zigler (Coastal Community) and AJ Plaizier (Yarmouth) in February to share our perspectives and experiences in developing and implementing what Pete Scazzero calls a Rule of Life. This was a companion conversation for the panel discussion offered on February 10th regarding Emotionally Healthy Leader. If you are new to the idea of having a Rule of Life, you will find the following resources helpful:
Pastor Cluster Leaders are encouraged to use these resources to inform and inspire the journey of renewal unfolding in the months ahead in our Clusters. I completed my 48-hour retreat in February to develop my own Rule of Life. I will be praying for each of you to make it a priority sometime before summer to go on a personal retreat as you ask the Lord to show you better ways for better days of abiding in The Vine. 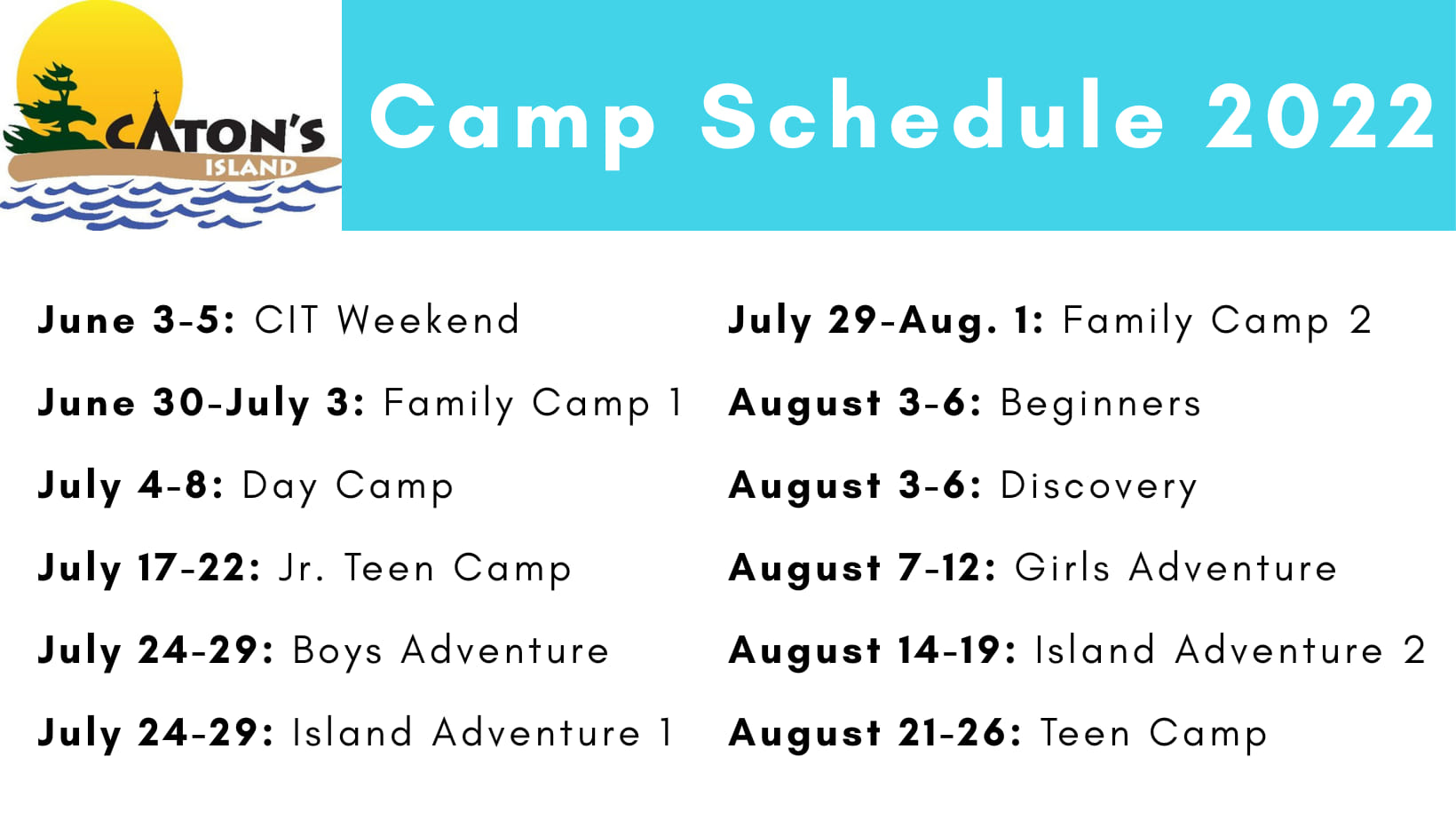 Registration for Caton’s Island camps skyrocketed in the opening week of February 15th with 397 registrations plus 45 families for the two family camps. Registrations are continuing to roll in! Don’t delay registering to ensure the camps/dates you want for your family summer schedule are still available.

Are you  looking for a resource that your church could use to help people discover and live out their God-designed missional calling?

Ed Love’s team partnered with Jon Wiest (through Groundswell) and created a version that any church can use at any time. LIVE SENT is a timely resource to help people clarify who they are in Christ and how they can use their gifts to pioneer a new mission that will reach people who are far from God. In this five-session course, participants will learn how to discover their calling and discern the voice of God in your life and ministry. Jesus told his disciples in John 20:21, “As the Father has sent me, I am sending you.” It’s time for every follower of Christ to discover their calling and “live sent!” This DIY resource is FREE for individuals and groups within a local church setting. Simply download the PDF leaders guide, personally invite your participants, craft a timeline for connection  or coaching, and link your participants to the online platform. The Leaders Guide and details can be found here => LIVE SENT!

Our HQ Next Gen team will be offering three intentional cohorts designed to explore in community the topics of a Christian sexual ethic, kids’ ministry best practices, and becoming a better pastor/theologian. Our Next Gen team will be hosting these practical and formative cohorts starting the week of April 4th. To sign up for one or multiple of these cohorts, you can email carlsonc@wesleyan.org or click the button below! 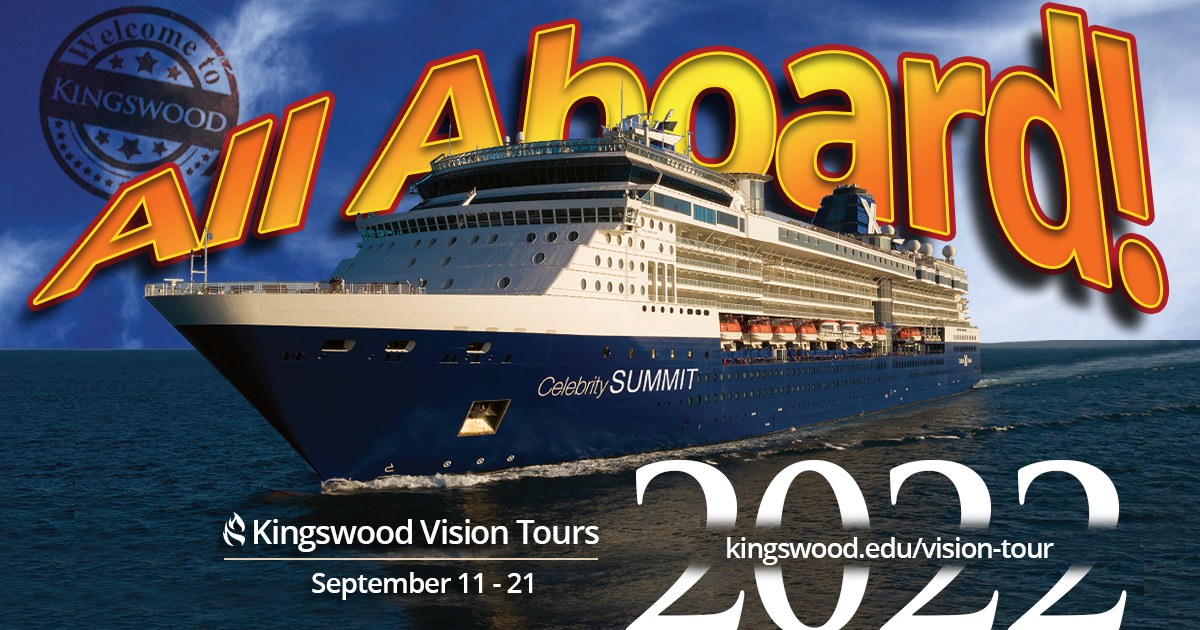 Registration is open for Kingswood University’s Fall Vision Tour Cruise. For more information or to reserve your spot, contact Debbie Benson (506-432-4411 or bendsond@kingswood.edu).
HERE TO SERVE YOU